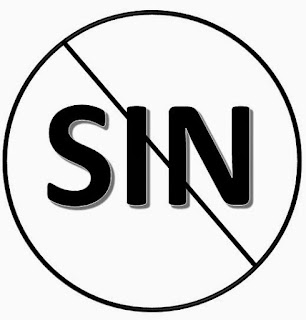 I've noticed that we Americans tend to whitewash sin in our lives. We explain it or rationalize it away but; sin is blatant mutiny against God. There is no other way to look at it. Either sin must die in our life....or God. The choice is ours.
Isaiah 53:3-6
"He was despised and rejected - a man of sorrows, acquainted with deepest grief. We turned our backs on him and looked the other way. He was despised, and we did not care. Yet it was our weaknesses he carried; it was our sorrows that weighed him down. And we thought his troubles were a punishment from God, a punishment for his own sins! But he was pierced for our rebellion, crushed for our sins. He was sin so we could be whole. He was whipped so we could be healed. All of us, like sheep, have strayed away. We have left God's paths to follow our own. Yet the Lord laid on Him the sins of us all."

We should always remember the price that Jesus paid for us, and not take it lightly!

Please read this guest blog from my friend Bob Brown. He posted this about Good Friday. I know you will enjoy it.

The Shouting Stones
Luke 19:28-40
There are some very interesting details in this story. It's important to read the Scriptures carefully or else we might miss something--or lots of things. We don't want to paint with too broad a brush. In a similar way, it's important that we are careful with our Christian faith--lest it fall into the hands of vicious wolves in sheep's clothing. You see it's easy to claim to be a Christian but it's another thing, altogether, to BE a Christian. What does Paul tell us?: "Even Satan disguises himself as an angel of light."
Being a Christian, involves the journey of faith. It starts with repentance and a decision to follow Christ--to sell all that we have in order to follow Him......it continues as we pay close attention to the details of what it means to be Christian and seek to live into being more and more faithful and true followers of the One Who rode into Jerusalem so long ago......went to the Cross for our sins......and rose again in order that we too, might have life--now and forever.
So, let's look at some of the details of our Scripture passage. One of the things that stands out to me is what Jesus decided to ride into Jerusalem on. I mean, why in the world would Jesus intentionally ride into town on a donkey......a silly looking donkey of all things? Don't you think it would be kind of embarrassing? I mean Jesus' entire life and ministry had been leading up to this point.
Jesus is entering Jerusalem--which, for the Jews, is the point of contact between heaven and earth. His disciples are proclaiming Him King of the Jews--and thus, King of Jerusalem--King of Israel--King of heaven and earth!!! They are introducing Him to the world. This is a BIG deal. This is a HUGE moment in history. If you were Jesus, what would you decide to ride on or in as you enter the city that sits at the center of all of Judaism, is home to the Temple, is the capital city and the focal point of your nation's cultural identity? What would you decide to ride on or in as you are being introduced to the hundreds of thousands, if not millions of people who are in Jerusalem for the Passover? What would you decide to ride on or in as you are being declared King and Messiah? Wouldn't almost anybody be most concerned with the people who are watching? Wouldn't you want to make the best impression possible? Wouldn't you get your hair cut or permed......wouldn't you get your nails done, your eyebrows waxed? Wouldn't you wear the most expensive suit or dress possible? And, again, what would you use for transportation?
Would you come in on a tank? A royal stallion? Would you have a motorcade and be flanked by secret service agents? I mean, think of the nerve it would take to come in riding on an animal that is primarily owned and used by poor people. Folks used donkeys for pumping water and milling grain......not for ticker-tape parades! They are not elegant or beautiful animals in any sense. They are beasts of burden. They are not intimidating nor are they impressive. It's just not the way things are done. It's not impressive. It's not becoming of the office. It's not ego-boosting. It doesn't fit. And yet this is what Jesus did--the King of the world--God become flesh.
As Jesus rode the young pack animal into the crowded and bustling city of Jerusalem some 2,000 years ago, His "whole throng" of disciples began rejoicing. "They praised God" with loud voices. They were causing quite the scene. And so, "some of the Pharisees from the crowd said to Jesus, 'Teacher, scold your disciples! Tell them to stop!" But there was no stopping them. Instead, Jesus answered: "I tell you, if they were silent, the stones would shout."
Now isn't that something? All of creation was paying attention that day. They were paying attention, because the One Who created it all had come to redeem the whole world--rocks, stones, hills, trees, animals, and especially people from the power of sin, death and decay!!!
Jesus had come to declare that the curse would soon be lifted. And it would be lifted by the Only One Who could lift it--the Sovereign God of Creation!!! He would take all the sin, all the weight of the world's pain, misery, hell and death upon Himself--and allow it to rip His mortal body to shreds on a Cross. That's how evil--evil is. It rips everything to shreds. But that's how great God's love is--it allows itself to be torn in order to save that which it created and called "good."
Many times I have been asked : "One thing I don't understand about Good Friday is why it is called 'good.' What is good about it? It's the day Jesus was killed on a Cross. It should be called Bad Friday!" But it is called Good Friday, because it shows us just how GOOD God is.
It is what gives us hope. It is what gives us meaning. It is what saves us, and makes life worth living!!! The love of God is so much stronger than the most horrible evil. It is so much greater than all sin, death and the devil combined. And it can save, even, a wretch like me!!! And that, is very, very, very good!!!
So as look forward to Resurrection Sunday let us continue to declare our praise. Blessings on the king who comes in the name of the Lord. Peace in heaven and glory in the highest heavens. Rejoice!!! The Master has come to save us!!!"
Will you rejoice as well?