This post may contain affiliate links.
Thank you for supporting my blog and homeschool!
See my full Disclosure statement for more information.
One of my favorite subjects is history. I love learning new (old) things. I love digging into a topic, or event and finding out all the small details and tidbits that make that particular thing even more unique and special to me. That is why I am so thankful for the opportunity to review the documentary Exploring Ephesus, by FishFlix.com. The only thing that could be better than watching this amazing film, would be taking a trip to Turkey yourself!

Dr. Mark Wilson and Dr. Andy Jackson greet you at the beginning of the film in Smyrna right on the coast of the Aegean Sea and drive to Ephesus. The sights are breathtaking along the way as you can imagine that Jesus as well as His disciples walked this same area thousands of years ago!

Ephesus was a stop on Paul's second and third missionary journey as he traveled throughout the Roman province of Asia spreading the message of Jesus Christ and Him crucified. Taking a look at the Bible through these two historians was wonderful for me!

Ephesus was the location for the great Artemis temple as well as the location for the temple dedicated to Domitian. In reading scripture you get a vague sense of the godlessness that was abounding in that area, but to really think about it while they are walking the vast ruins of these ancient temples really added a new level to my understanding of scripture.
The apostles were up against great odds, much like we are today, only for them it would mean sacrificing their lives to bring the Truth to those who did not know.

Dr. Wilson and Dr. Jackson relayed a story that happened in Ephesus. You can find it in Acts 19:23-41
Here is a little bit :23 About that time there arose a great disturbance about the Way. :24 A silversmith named Demetrius, who made silver shrines of Artemis, brought in a lot of business for the craftsmen there. :25 He called them together, along with the workers in related trades, and said: "You know, my friends that we receive a good income from this business. :26 And you see and hear how this fellow Paul has convinced and led astray large numbers of people here in Ephesus and in practically the whole province of Asia. He says that gods made by human hands are no gods at all. :27 There is danger not only that our trade will lose its good name, but also that the temple of the great goddess Artemis will be discredited; and the goddess herself, who is worshiped throughout the province of Asia and the world, will be robbed of her divine majesty." :28 When they heard this, they were furious and began shouting: "Great is Artemis of the Ephesians!" :29 Soon the whole city was in an uproar. The people seized Gaius and Aristarchus, Paul's traveling companions from Macedonia, and all of them rushed into the theater together. :30 Paul wanted to appear before the crowd, but the disciples would not let him. :31 Even some of the officials of the province, friends of Paul, sent him a message begging him not to venture into the theater. :32 The assembly was in confusion: Some were shouting one thing, some another. Most of the people did not even know why they were there.

I know that I have read this story before through my normal Bible reading, but seeing the theater and witnessing the city ruins......understanding the mindset of the day and the society in which the apostles lived in, really helped me understand this set of scriptures differently than I ever have before. I found myself watching it for the second time before I even realized it! The second time watch it with your Bible in your hand!

Below you will see the earliest fresco painting of the apostle Paul. Churches in Ephesus either met in small groups in people's homes or in caves. This painting was found on the wall of a cave and it is Paul. I am sharing this because I love the fact that this was added to the DVD. To see what he looked like helps me to really put some perspective to my thoughts. He was a normal person just like you and me. A normal person who did extraordinary things.....because he obeyed! 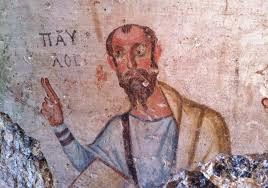 How I Used the Product:
I watched this movie (more than once) with my kids. I also watched all the additional bonus features that the DVD had to offer.
* The Book of Ephesians (Commentary)
* The Seven Churches (Commentary)
* Lessons for Today
* Trailer
* Music Video﻿
My Bottom Line:
I loved watching this documentary. It was well done and enjoyable. I found the historians, Dr. Mark Wilson and Dr. Andy Jackson very intelligent and easy to understand. I loved watching it with my kids. I know they didn't get the same things I did out of it, but they too enjoyed it. As I said at the beginning, I LOVE history! This for me wasn't long enough. I found that I was wanting more! With that being said, really the only way to get more out of a trip to Ephesus would be to travel there yourself. This is a must see movie and a helpful accessory to your study. I sure hope they make more!!!﻿